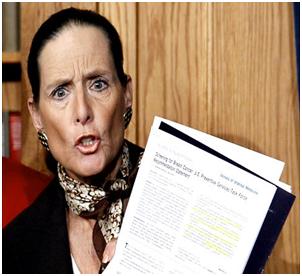 Today’s New York Daily News had a story that I found interesting.

Ohio congresswoman, Rep. Jean Schmidt, shocked teachers and students of a Cincinnati Catholic school when she began discussing abortion to an audience that ranged between first graders and eight graders. In a letter written to parents by the school Principal, Dan Teller says “Your children may come home with questions, especially if this is a topic that has not been broached in your home.”

What responsible parent is discussing abortion with first, second, even third graders? I’m just a bit confused as to how this topic was even allowed to continue once it was brought up. The Principal should have stopped it as soon as it started.

Schmidt apparently began discussing the abortion topic while speaking about the connection between moral issues and legislation. She used it as an example to make her point. In the letter to parents, Principal Teller explains “She defined abortion as the taking of a child’s life in the mother’s womb. She indicated that abortion involves the killing of a child before it is born.”

This is rather mature content to be discussing in the presence of 6 yr olds and I would assume for some, even a little scary.

Some 6 yr. olds have never even dealt with the issue of death so to say that abortion involves killing is irresponsible on the part of the Congresswoman as well as the school. I can understand talking about sex and consequences with an eighth grader but even so that should be a discussion that happens in the home and not at school.

I have 2 nieces, 7 and 5 yrs. old and this is not a topic that I would like be discussed with them while at school. I can almost bet that my sister and brother-in-law would agree.

Noting that Schmidt “was not invited to further any political agenda,” Teller apologized to parents “for any confusion or fear that this may elicit on the part of your child, and for the awkward position this may put you in of introducing a difficult issue at a time that may be premature for you.”

I don’t understand how a written apology is supposed to suffice in correcting this obviously irresponsible and negligent behavior. This just isn’t acceptable nor should it be. If my child was a member of that audience I would need more than just a written apology.

What are your thoughts? What if this happened to your child, how would you respond?