Yesterday, as part of my weekly schedule, I went to visit my sister, Diana, and my brother, Johanny (aka brother-in-law). I always enjoy visiting them because I get to spend time with my nieces and nephew and I also get to whip Johanny’s ass in Jeopardy.

My 2 1/2 year old nephew, JD, had a doctor’s appointment yesterday so on her way home from the doctor Diana picked me up from work.  As I get in the car I look in the back seat to say hello to JD. I notice that he is knocked out in his car seat. I tell Diana, “He’s out like a light, the pobrecito must have had a rough doctor’s visit, huh?” She says ” Yea, the doctor gave him three shots”. She then begins to give me the other details of the visit.

He’s in the 96th percentile for the size of  his head (meaning this kid has a BIG  head). It’s not just BIG but really BIG.  His head is bigger than 96 % of other boys his age. That means that only 4% of other 2 yr olds have a bigger head than he does. Bendito. JD, you have to thank “Poppa” for that. That “big head” is a feature the poor thing has inherited from his grandpa. Thanks dad, because of you, my nephew is a mini-me version of Spongebob Squarepants. On the bright side, “Poppa” grew into his head so I’m sure JD will to…well at least I hope he will 🙂

He’s in the 78th percentile for his height (so, he’s taller than most boys his age) I figure this could be a good thing, maybe we have the next Puerto Rican Kobe Bryant in our family.

Lastly, she tells me that he’s in the 45th percentile for his weight. Ok, maybe he’s a little underweight, but it’s not his fault. Since his head is so big, the rest of his body is unproportioned.

On the car ride home, my sister tells me that she has to make a stop at the supermarket (part of the deal for my weekly visits includes a clause that says she has to cook me dinner)…yup she has to feed me if she wants to see me. What can I say, I like to eat. No feed, no me.

While she’s doing her food shopping I stay in the car watching JD. I’m sitting in the front seat and I occasionally look back to make sure that he’s ok. At one point, I realize that he’s awake so I get out of the font seat and go sit with him in the back seat.

“Hi papi”, I say to him. He doesn’t respond. He looks at me with this blank stare that says “I’m tired, I had a long day, and I don’t feel like being bothered”.  Basically, he’s not in the mood for me. Despite him igoring me I continue my prodding. “Mommy told me that you went to the doctor today, how was it?” Again, he gives me a disregarding look. I know he just woke up and he’s cranky but those big brown eyes and those round rosy cheeks won’t let me stop so I decide to take take a different approach.

I say “Give titi Nancy a kiss. I missed you”. Still no response. At this point I feel like I’m talking to myself which technically I am. But I’m no quitter so I continue.

“What’s wrong JD, are you still tired papi”. By this point, he starts to warm up to me, it’s either that or he figures “let me just respond to her so she can shut up and leave me alone”.

He says, “I fight the doctor”. I wasn’t expecting that response, but because I knew about the 3 shots he was given, I figured that was the reason for his reply. I suddenly realized that he finally replied to me and I was excited. Instead of leaving the poor kid alone, like I’m sure he thought I would, I continued the conversation, “They gave you shots with a needle huh papi?”, I said.  He replied “Yes and it hurt”, in that cute little baby voice that just makes my heart melt. I told him, “I know, but you’re ok now”.

The next sentence that came out of his mouth caught me totally off guard. He then says , his exact words, “I hate the doctor”.  He said it so pathetically. Almost as if he was trying to get my sympathy and I couldn’t help but laugh. I know I shouldn’t have and I probably should have given him a lesson on not to use the word hate but it was so unexpected I couldn’t help it. Plus, I figured I’m just the aunty. My job is to spoil him, let the parents teach him life’s lessons. 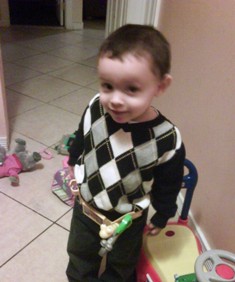 JD playing after his doctor’s appointment.

3 thoughts on “Visit to My Sister’s House: (Part 1: The Doctor Visit)”