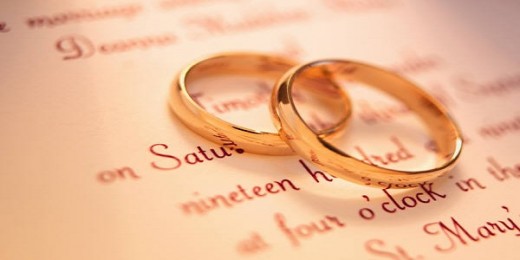 I was 23 years old when I got married. We met when I was the tender age of 20, just two months shy of my 21st birthday at a club in New York City. He was with his friends and I was with my girls when one of his boys accidentally knocked the drink out of my girlfriend’s hand as we tried making our way around the crowded club. The music vibrated off the walls, groups of guys huddled around tables full of bottles of champagne, and the women danced together in circles giving the side eye to any guy who tried to infiltrate their strategically planned barrier. What happened next is debatable because he swears that I initiated the conversation, but I am more than positive it was him. Either way, our paths crossed that night and we’ve been together ever since.

When I decided that I wanted to get married everyone said that I was too young. I was still in college pursuing my undergrad degree, working, and living at home with mom and dad. Aside from a car note and car  insurance I didn’t really have any financial responsibilities. Everything from the roof over my head, to food, and credit card bills was taken care of by my parents and I didn’t care that with marriage came a long list of responsibilities that I just wasn’t prepared for. I was young, foolish, and in love.

Everyone warns you that marriage isn’t easy, but when you’re in the romantic stage of love that’s the farthest thing from your mind. You’re not thinking about how he calls his mother two to three times a day to “check in” which at the time you think is cute, but will make you turn into a raging lunatic reminiscent of the Exorcist foaming at the mouth and head spinning, five years down the road. Or how your ambitious go-getter attitude and dedicated work ethic that he initially found so sexy turns into resentment and jealousy later on. Or how opening a joint bank account turns into the Spanish Inquisition whenever you spend or withdraw money. There are so many things that factor into a marriage, many of which you have no clue about until you are in the throes of it.

All relationships undergo periods of change and adjustment, marriage is no different. Two people, who were once strangers come together and attempt to build one life together. That is one hell of a feat. What most of us fail to realize is that when we get married we bring all of our experiences (both good and bad), beliefs, and attitudes along for the ride. We also bring along the experiences of those closest to us. What we witness in our families and our friendships sometimes influences our choices and judgments.  So when we find ourselves in similar situations we tend to use those experiences as references, which is not always a good thing.

Most couples believe that romantic love lasts forever. Well, I hate to break it to you disillusioned lovebirds, it doesn’t. Once couples come to this realization, many of them think that there’s something wrong with their partner. Instead of seeing the similarities that exist between the two, some couples begin focusing on the differences and their partner’s flaws.

Not knowing how to navigate through this stage of love most of us will try to change our partner back into the person we thought they were, or punish them for not being that way, or both.

We’ve been together for 16 years and married for 13 and what I know for sure is that marriage is hard. In a sense we have grown up together. We have seen each other at our worst, have said the meanest, vilest things to one another, but have also bared witness to each other’s growth from selfish individual to selfless partner. I’ve watched him fight for his life as a cancer survivor and he has been my greatest supporter and motivator as I pursue my writing dreams. It has been a long journey for the both of us and we still have so much further to go.