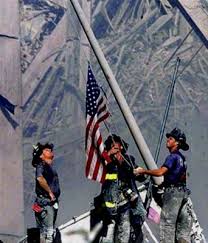 As the country remembers all those that we  lost on 9/11/01, I will never forget where I was, what I was doing, or how I felt on that day. The events of that day changed our nation as we knew it. I remember feeling anger and hatred towards the terrorists who waged war against us. It was because of their hatred for this country, that I love so much, that they decided to use innocent people as their weapons of choice. But today on the 9 yr anniversary of those attacks, we are stronger than we were then. They tested us & tried to kill our spirits but we rose above it, united as a country & decided that the foolish acts of a few weren’t going to kill the faith of many.

The first few days of the attack can be described as nothing less than pure chaos. Debris from the fallen towers engulfed New York’s Financial District and families full of fear, worry, and hope walked aimlessly in search for relatives. They posted flyers, carried pictures, and held nightlong vigils hoping against all hope that their loved ones would be pulled from all of the wreckage left behind from the fallen twin towers. I watched these images on TV and couldn’t help shed tears for my country and for all that was taken from us that day. I had never felt so afraid and unsafe and I vowed that I would never again get on an airplane. The terrorists had succeeded in their mission. They had shaken the United States and images of them laughing and celebrating haunted me for months. These were very evil people and never will I understand how such evil can exist in a person made of  flesh and bone.

It was a very sad day in American history that we all had to live thru. I remember back then it seemed so surreal and I couldn’t believe that a terrorist attack of that magnitude actually happened on our soil. It opened my eyes to how even the strongest nation in the world can be vulnerable to the hatred that exists in the hearts of a few. There are some that ask “why do we say never forget only once a year”? As an American, although I may only say it on this day it  does not mean that I don’t think about it often.   Most of us may not be as vocal about it on a daily basis but there are over 2000 families that say it everyday.
Those that lost loved ones have to live with the events of this day for the rest of their lives. Today, however, is a day that the nation as a whole remembers all those that were lost and all that our country truly stands for. We are a democracy of strong willed people who believe that freedom for all is a basic human right and there will always be some radical or fanatic that wants to challenge what we stand for. They can come at us with all that they’ve got but never will we ever give up without a fight. So today as I say we will never forget, may all those who plot and scheme against us know that  their cowardly actions  only aid in making us stronger.
I conclude by leaving you with a quote from one of our Presidents:
“The real differences around the world today are not between Jews and Arabs; Protestants and Catholics; Muslims, Croats, and Serbs. The real differences are between those who embrace peace and those who would destroy it; between those who look to the future and those who cling to the past; between those who open their arms and those who are determined to clench their fists.” ~William J. Clinton, 1997