Join me January 23, 2014 as I perform alongside some of NYC’s most distinguished poets at the Nuyorican Poet’s Café as we celebrate the memory of our loved ones who have passed on. 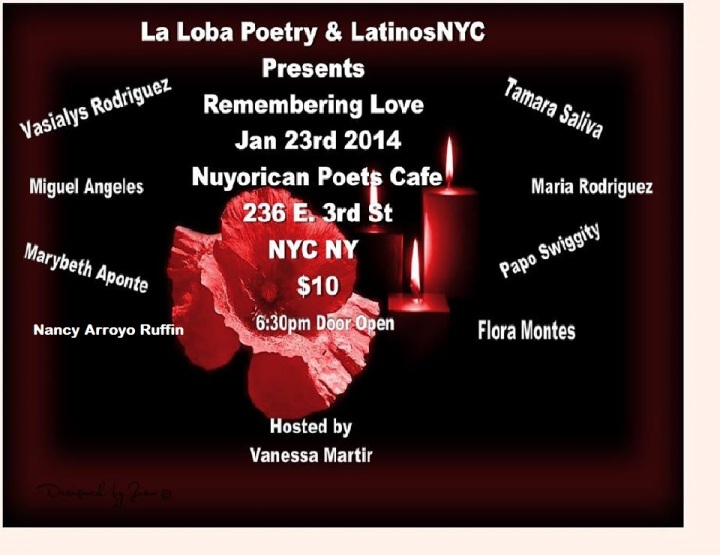 Vanessa Mártir aka La Loba is currently completing her first memoir, A Dim Capacity for Wings, which reveals the silences that devastated her family and ultimately led to the death of her brother. She chronicles the journey of writing her memoir in her blog vanessamartir.wordpress.com. Vanessa created the Writing Our Lives Workshop  where she takes emerging writers through the steps of writing a personal essay. She facilitates the six week class at Hunter College. Vanessa is a five time VONA/Voices and also the newsletter editor. She works as a teaching artist throughout NYC public schools & community organizations. She’s published a novel, Woman’s Cry, and has had essays published in journals like Portland Review and the upcoming VONA anthology “Dismantle.”

Vasialys Rodriguez is a nine year old fourth grader who writes poetry, stories & song lyrics. She loves to sing & dance all around the house. She also loves sweets like vanilla ice cream & chocolate chip cookies. She wants you to know she is a very spiritual girl and that her favorite color is purple.

Community Arts Activist/Educator, Maria Aponte has worked in Latino Theatre against racial discrimination and women’s rights. In 2010, Maria received the V-DAY Award for special recognition from the Eve Ensler Foundation for “someone who has suffered or witnessed violence, and then does extraordinary work to make sure it doesn’t happen to anyone else in their community.” In May 2013 Maria’s book, Transitions of a Nuyorican Cinderella won 2nd Place for Best Poetry in English at the International Latino Book Awards.

Marybeth Aponte is a recent graduate of Cazenovia College. Born and raised in the South Bronx, Marybeth has been writing since the age of nine. She knew she wanted to make it her life when she was a junior in high school. She hopes to publish a collection of poetry and someday write a memoir.

Shamar Hill, who is Jewish, African-American and Cherokee, graduated from the M.F.A. program at New York University, where he received a fellowship. He is the recipient of numerous awards including the New York Foundation for the Arts Award. His work was featured on the public television series Caught in the Act: Art in Brooklyn and been published in magazines and journals including The American Reader. He is working on his first poetry collection Photographs of an Imagined Childhood and a memoir Conversation with My Fathers.

James PEACH McClory is a spoken word artist on the scene for over three years now. As both a former youthful offender and now Court Officer in Bronx Family court for the past 18 yrs, his self published book, Rooftop Reflections, is a story about how poetry isn’t about fame or prestige, but about spiritual redemption, a medium where he can exorcize the demons of a hard life lived with equal parts compassion, reflection and love.

Flora Montes is a graduate of Culinary School and the current Northern Regional Director of G.I.R.L. (becauseIamagirl.com), a non-profit organization committed to mentoring and empowering young women. She uses her artistic abilities to guide and support many women all throughout the United States.  Flora, also known as ‘’La Poeta’’ is a published poet of Puerto Rican descent from the South Bronx. After healing and rising from the adversity of her less than ideal childhood, she has used inspiration and the strength from the pain to make her dreams of changing the world a reality.

Maria Rodriguez is a Mother, Writer, Poet and Curator. Born and raised in East New York Brooklyn, this Puertoriqueña discovered her penchant for self expression during her adolescent years. Writing songs to freestyle beat. Maria has been published in the New York Daily News, Sofrito for Your Soul and “Me No Habla with Acento” an Anthology of Contemporary Latino Poetry. She is an original cast member, contributing Writer and Co-Producer for “Soledad Speaks”. An intergenerational tale performed through monologue and spoken word and produced by Odd Girl in Entertainment. Maria has curated shows for the NYC Latina Writers Group as well as SPEAK UP! Voces from the Movement as part of El Museo del Barrio’s Speak Up! Spoken Word Series. She has also facilitated workshops and open mic’s for the youth at her local Boys and Girls Club. Her sometimes funny, always potent words infuse a raw realism of life and lessons wrapped in spanglish idioms and firmly planted in her Nuyorican roots.

Nancy Arroyo Ruffin is a New York City born Latina of Puerto Rican descent. She is a mother, wife, and author. As a performance poet and writer, Nancy has used the written word as her outlet to inspire, educate, and empower.  She has facilitated writing workshops for aspiring writers and has performed at various venues in her beloved New York City. Her first book Welcome to Heartbreak: A Collection of Prose & Poetry was published in 2011. Most recently, her work appears in Joy, Interrupted: An Anthology on Motherhood and Loss published by Fat Daddy’s Press. Her second collection of poetry, Letters to My Daughter will be available January 2014. For more info visit www.nancyruffin.net.

Tamara G. Saliva is a native Nuyorican born in Brooklyn NY. She is the self published author of Blue Vein Pages & is aspiring to write her first memoir. She has recently taken on painting as an outlet, something that is familiar to her but she was never brave enough to pursue. Tamara was raised on the borders of Harlem and Washington Heights.

Mark Anthony Vigo aka Vigo Hard BK is a lifelong resident of Williamsburg, Brooklyn. Coming of age during the birth of Hip Hop has heavily influenced his perspective & style. He is no stranger to the “mic”; performing all over New York City. He is currently in the process of publishing his first book of poetry, prose, and spoken word.