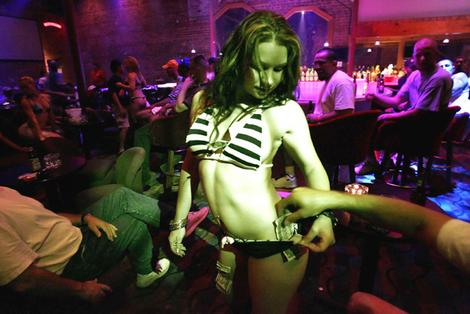 The art form of stripping has been an element of entertainment and pop-culture  for a very long time. Stripping or the strip tease dates back to the late 19th century when theatre, cabaret and vaudeville were at their height of popularity, and burlesque emerged as a new form of entertainment.

Although stripping still exists, the nightclub stage act known as the striptease faded from popularity in the late 1960s and in its place we now have aspiring so-called “models”, “video vixens”, and “actresses” taking it all off for anybody that can “Make It Rain”.  It seems like every rapper and ball player can be heard all over the radio and in interviews boasting about how much money they drop on any given night at one of these gentlemen clubs.

Nene, from The Real Housewives of Atlanta, just released a new book and in the book she reveals how she used to be a stripper when she was younger.  In the book, she explains that as a result of ending her relationship with the father of her eldest son, Brice, she had to strip in order to make ends meet. She says that she was living with her son and a roommate and she just didn’t have the funds to support herself and her child. In the book, Nene states “My son was in private school, his father wasn’t chipping in for pull-ups or food, I had no job and no money coming in, the rent was past due, and the super told me and my roommate that our condo owner was about to put us out,”  “So I did what I had to do.”

Now, I’m not one to knock anybody’s hustle but is this the example that we want to set for our young impressionable boys and girls? Is being a stripper what we want our young girls to aspire to be? I am very bothered by women that feel that taking  their clothes off for money is a respectable profession.  Those that think that it’s ok as if there are no repurcussions are either misinformed or have a warped view on life. Everything one does inexplicably becomes a part of that person’s history and once it’s done there’s no erasing it.

Not too long ago Karrinne “Superhead” Steffans bragged about her sexual exploitations in the music and sports industry so much so that she wrote a book about it detailing almost every encounter. I’m sure she got paid, as her book made it to the Best Sellers list but is that what you really want to get fame and recognition for? It makes me wonder if these women have any other talents other than taking off their clothes, dancing, or performing sexual favors. It never ceases to amaze me the things one would do just for a little fame, money and recognition.

Most strippers, when asked why they do it, will tell you that they had no choice. They say that they’re trying to put themselves through school so that they can have a better future or that they have a kid and have to provide because the so called father is either out of the picture or a straight up loser. Whatever the reason is I don’t buy it. Strippers always give some sob story as if their unfortunate circumstance forced them to get on that pole and drop it like its hot. When the reality is, there are other ways to put yourself through school and provide for your child.

Newsflash for all strippers, YOU DON”T HAVE TO TAKE YOUR CLOTHES OFF  in order to pay for school. If you are destitute and have absolutely no money guess what, you can get full financial aid (one of the beauties of this great American country). The system is designed to help either the extremely poor or the filthy rich. Middle class citizens like myself have to rack up tens of thousands of dollars in loan debt just to go to college.

Now, if your a stripper that doesn’t have college dreams but is claiming to strip because you have to provide for your child, shame on you. You should have thought about that before having a kid. Who in their right mind would have a child when they very well know they can’t even provide for themselves. I guess these are lessons to be learned after the baby is here. In my opinion, I think these chicks just love the easy money and apparently their self-worth, self-respect, and reputation is worth it.

During NBA All-Star weekend baller Pac Man Jones was involved in a shooting at Minxx Gentlemen’s Club in Las Vegas all because he was trying to make it rain. An amateur video surfaced on the internet of the incident that led to the shooting. What I saw disgusted me. The video shows women on their hands and knees practically falling over each other trying to grab some of that raining money. At one point JD (yes Jermaine Dupri) gets on the mic and instructs the women to continue dancing and not pick the money up from the floor until he tells them to. See for yourself:

Seriously, are you kidding me??? Here is one of the most respected producers in the music industry acting like a pimp. The ironic part of it all is that the women listen to him. It’s just very sad and disheartening that women think so little of themselves that they allow to be talked to and treated in that manner.

I know everyone has their own experiences and until we walk in one’s shoes we shouldn’t judge. But, it’s hard not to judge and while i’ll never understand why these women do what they do I do know that no matter what my circumstance or situation I would never subjectify myself just to make a quick dollar.

3 thoughts on “Make It Rain”